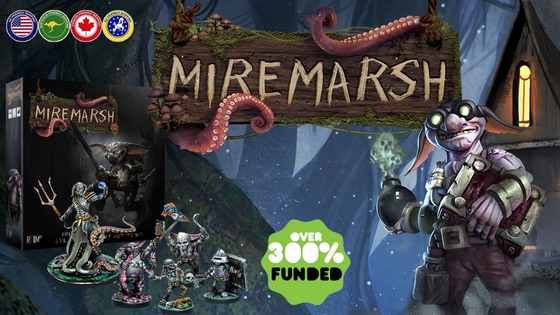 A game of evil deeds, death and tentacles for 1-5 players.

Latest Updates from Our Project:

While Anders is enjoying a well deserved holiday before returning to get hands on with the Pledge Manager, I'm in constant communication with the manufacturer to assess progress on all the tricky elements - i.e hard components of the product.

Yesterday we received the first PVC batch of minis. Check these out and let us know what you think (ultimately this is YOUR game). We have 6 minis to send to six backers so you can give us your feedback

For an accurate comparison, alongside the PVC mini, we'll send you the resin counterpart. As most of you know, the process of mold making and casting always affects a small amount of detail from the actual sculpt (no matter if the sculpt is made in traditional putty or digitally). Resin and metal are the two mediums that hold the detail better, followed by HIPS ("hard sprued plastic") and then PVC in its different hardness.

Well, we're very chuffed with our PVC (at 95% hardness) and we want you to check it out and let us know. Please email me at ricard.fortun@room17.games with your Miremarsh name, real name and address to send you the samples. The first 6, gets to put their dirty goblin hands on them.

More samples will come after, so don't worry, we'll try to cater for as many of you as we can, just bear in mind that this is to help all of us to get the best possible product - not just a free toy! So please be committed if you throw your hand up.

We've also received the dice! Five sets to be precise to allow us to check the mold execution and how the icons go with the PANTONE (colours) chosen. I must say, they look fantastic (I'm a dice person myself). The icons are larger than those in the mock up as we opt for straight corners to give more space. The feeling is very Miremarshy and the colours, we believe, are spot on (remember, Anka consciously selected these to be colour-blind friendly!)

In the art department, Anka is distributing the lot among Andres and Mary to finish all the illustrations needed. Andres told us he will have all the goblins finished by next week (see Bubbler next) which will speed up the sculpting no end.

Mary is working on the new tiles very closely with Matt & Sam who will come to visit on Monday 6th to finalise what goes into the final game to help the design team focus on the finished project.

And that is pretty much where we are in this fine August. And yes, I forgot, for those who backed our Museum Rush kickstarter, Anders left work for Kev and myself and we are preparing the first All-In shipment to backers via Games Quest which we aim to have ready by Monday! The office looks like a mix of art gallery and dispatch warehouse - seasoned with flip-flops and shorts... Summer time!

Thank you all gobs!

With the six first sample packages gone (PVC mini plus resin counterpart) we are now waiting on some more print proofs. We are expecting quite a lot of them, so we should be able to send them across to more of you! When reviewing them, please be positive and clear. It might help other backers if you compare the elements received with those from other games as a reference.

And now, the news!

As you know Matt and Sam had a great session with Anka on Monday and the elements are now lined up for the conclusive and final elements. Mary and Anka are all over the illustrations needed and Kev is working on the rulebook lay out to incorporate the new additions for landmarks, knick knacks, etc for a total of 4 extra pages! That will also allow for more breathing space and some clarifications!

We're hoping to update the PDF of the rules soon.

The Undermire booklet is in the works and M&S are working on the final rules. Graham is ready to edit them… and these will be up for you to read when done.

Andres is smashing it out of the swamps with the Rock Goblins, with his latest one Wrecker finished. Tomorrow we expect to receive Killer and Dazzler!

Of course as new illustrations arrive, they go straight to the sculptors (we are now working with two fantastic teams: Matt Parke’s freelancers and the Beholder Factory).

While all the fun is happening, I’m organising the mold structure with the manufacturers (the first two molds are done - components for main game which also have the ghost gobos of course) and we are now preparing the next to bring in Monsters, fish (we are aiming at casting them in rubbery PVC for a fishier feel), bones and coins (finished!).

On the Pledge Manager front, Anders will come back from holiday on the 15th August and will be all hands on deck with the Backer Kit and Late Pledge front. To allow this, Kev, Anka and myself are continuing to pack Museum Rush All-In pledges while still waiting for the rest of Wave Two to arrive (already on a boat according to the latest news!).

So as you see, we are quite busy and excited about everything going on: past, present and future!

Many thanks to all of you and the great work you are doing in BGG. Keep bringing new gobs to the marsh for the late pledge!

++ Gossip ... gossip ... gossip ++ Further discussions are happening about the next game and how and when to approach this with you guys. And of course we continue talking about that spin off game suggested by you. Village of Fear is a good reference for the lovely interaction between gobs and humies.

First though, we want to ensure that Museum Rush is totally delivered (we made a lot of rookie mistakes and is costing us some extra time!) and Miremarsh is in the good hands of the manufacturers before turning our heads to focus 100% on the next project!

As Goblins litter the swamps of Miremarsh and monsters limp back to their lairs, only one stands victorious!

All hail the new Goblin King!

This has been an absolutely amazing kickstarter campaign and we're blown away by the support and the love for this game. We're incredibly proud of Miremarsh and are really excited to get it made and into your hands! We can't stress enough how much we've enjoyed seeing the interaction of the backers and taking on board some of your amazing input.

As a reward for your vital involvement and as a final THANK YOU we're going to consider the final SG unlocked and include it as a tribute to you, the goblins in this community.

We’ll have more news and info for you over the coming days and weeks.

Now go. Return to your lives and be careful what you do with those pointy sticks, they aren't toys you know!

We're into the last hours of this amazing kickstarter campaign and we're all pretty speechless. Thanks one and all - pointy sticks for everyone!

Over the weekend you all blasted through a good number of stretch goals and have got us scrambling to keep up with you all (we're not complaining!!).

You've managed to unlock 24 Stretch Goals so far and got us producing new elements and twists to the Miremarsh game as a whole. Matt and Sam are busily scribbling away hidden in their weathered old tree, making the gameplay succinct and fun, whilst Mary and Andres have been throwing paint in the Undermire to produce new and exciting artwork.

The rest of us have been taking it easy...kidding!

You've managed to turn those adventurous Durgin Paint Forge Dwarves to Wandering Monsters as well as the Mantica Heroes!

Our next stretch goal to be unlocked is a plastic box tray that will be designed to hold the goblins and wandering monsters, keeping them safe and sound at night from those trying to destroy them.

Because our backers are so incredible, we have one last stretch goal for you all.

Kickstarter exclusive BACKER INSPIRED tiles and cards. There may be a Pink Dragon and pointy sticks!

Thanks one and all.

He peered from behind the hulking mass that once was a tentacle of the Swamp Creature and wiped the sweat from his filthy brow. There it was. The thing he'd been on this crazy adventure for. Victory was calling...

Whoa, into the last few hours now and you've unlocked the plastic tray to keep those Goblins safe - almost like a parent!

We received some (slightly out of focus) photos this morning of the production quality of the Goblin miniatures. We're pleased with how these are turning out.

Our last Stretch Goal to tip us over the edge is the 140k kickstarter exclusive tile and card pack. This is inspired by you awesome backers, so fingers crossed!

Time is ticking own...